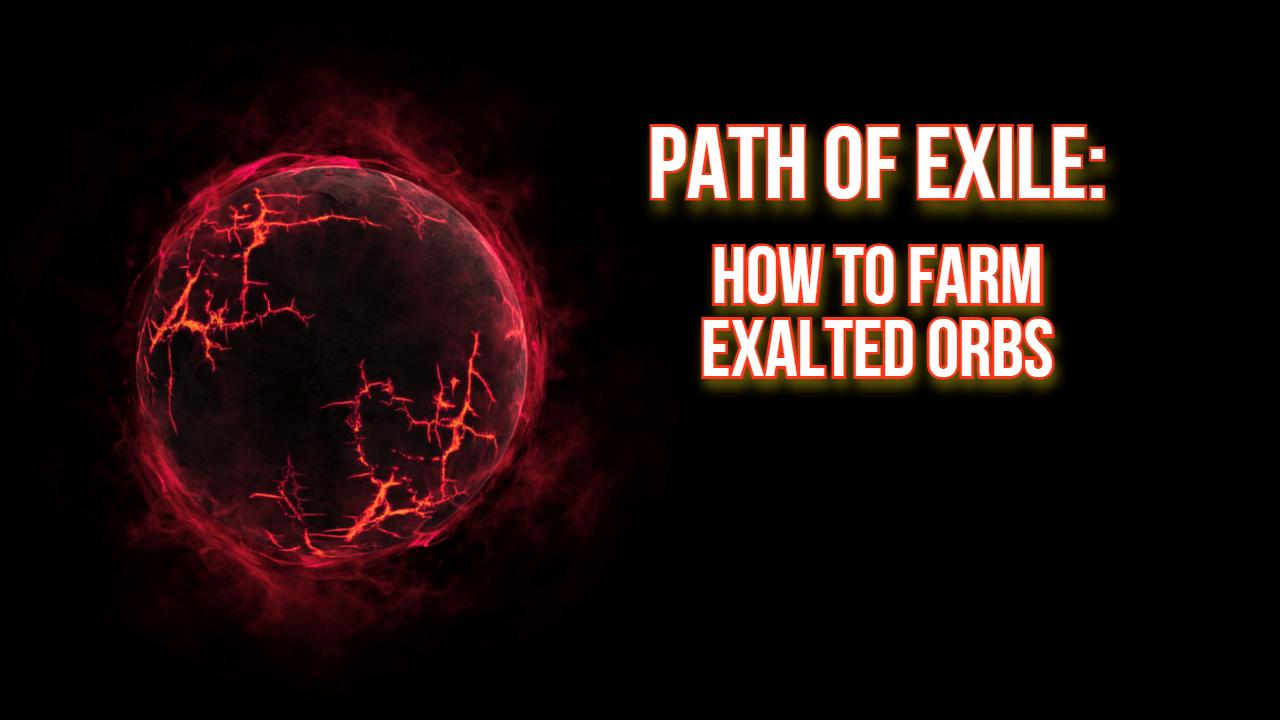 Exalted orbs are yours for the taking!

Though some players tend to look down upon farming as an in-game activity, there’s really no denying its value. This holds especially true in a game like Path of Exile. With just a few tips, a pinch of perseverance, and a little bit of time and effort, you players can earn a ton of currency to help them in their unending quest for bigger, better PoE items and PoE uniques.

As Exalted orbs are the most coveted and highly-valued currency in the game, it’s only natural that it is quite hard to find. Its drop rate is notoriously low and you’ll need to do quite a bit of grinding if you want to collect much of it. Fortunately for you, we’ve got you covered.

Here are some foolproof tips to help you farm PoE exalted orbs with utmost efficiency!

Before we get into the nitty-gritty of things, let’s first define what Exalted orbs are exactly. In Path of Exile, they actually play a vital role in the game’s economy given their value. Through them, players can craft various high-end items that they can use throughout their adventures in Wraeclast. It is perhaps because of this that players have come to regard it as the golden standard of all currencies in Path of Exile. Considering that they have a dubiously low drop rate of about 0.055%, you’ll need to come up with creative and effective ways if you are to farm them effectively.

Now that that’s over and done with, let’s get down to how you can farm them!

There’s no room for petty pride here. The fact of the matter is you have to get orbs through however way you can get them. Given that exalted orbs have a rather low drop rate, you can’t afford to be picky. To increase your chances, you simply need to kill more mobs, pop more chests open, and flip over pretty much all the rocks you come across. The more you do this, the more chances you have of racking them in!

Now before you go off picking up practically every orb you come across, you have to keep in mind that exalted orbs are the ones you need. Eyes on the prize! Don’t lose focus. If you know that you’ve got a tendency for hoarding, you may be able to curb it by strictly filtering your loot. This way, only exalted orbs get to go into your inventory and you will end up wasting neither your time nor your effort with less valuable items.

Should you have a surplus of the more valuable orbs with you, then you’d also do well to convert them. Currency such as Chaos orbs can be converted to Exalted orbs. As it stands, you’ll need about 60 Chaos orbs in order to get a single Exalted PoE orb. But before you think that this is an altogether tedious process, think again. You’ll end up gathering enough Chaos orbs while playing anyway—whether or not you look for them consciously. You might as well make the most of what you have and get the type of orb you wanted in the first place!

Another way of obtaining exalted orbs is by putting together 20 exalted shards. In addition to this, you may also fall back on a lesser-known yet equally effective route. By farming divination cards, you can see your Exalted orbs grow exponentially. You’ll need to keep your eyes peeled for The Saint’s Treasure, The Hoarder, and Abandoned Wealth for this.

Farming Exalted orbs, though a bit of a lengthy process, can be a very rewarding one. The sheer value of this PoE currency can be felt right away, making it a worthwhile venture. But with these tips, you’ll be on the fast track to a truckload of them in no time at all. Good luck on your search, exile!