Sitting in front of a computer now, it's hard to remember a time when the number of things you could do with it was limited. Back in the early 1990s, very few homes had the internet. You couldn't go online in search of entertainment. You couldn't even go online to seek knowledge; you had to use Microsoft Encarta or something similar if you wanted to do that. Games were basic, and were best played on the Super Nintendo or the Sega Genesis, which were popular at the time. Your computer was something that you worked upon - often little more than a word processor with delusions of grandeur - and if you were bored or had a little time to spare, you might play Minesweeper or Solitaire. 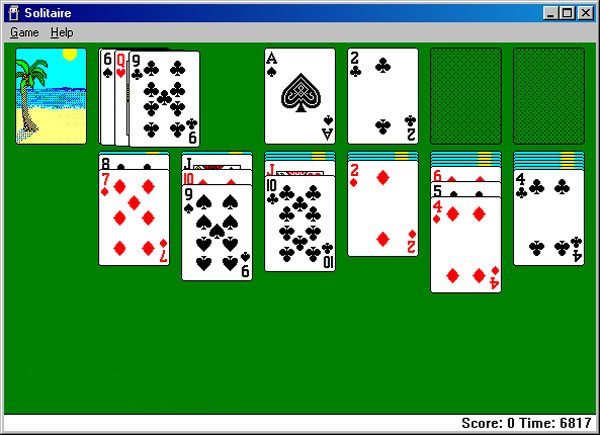 If you just read that paragraph and felt a wave of nostalgia wash over you, we’re not surprised. Playing basic Microsoft Windows games was almost a rite of passage for many of us who remember the early days of PC Gaming, and it takes us right back to our youths. It has to go a very long way back in time in order to do so, though. Amazingly - and perhaps a little terrifyingly - Microsoft Solitaire is thirty years old as of May 2020.

The idea of playing a card game on a computer was a novelty back in 1990. Even the fact that we could choose to alter the patterns on the back of the digital cards seemed impressive. In a way, perhaps Solitaire was a precursor for the online slots and casino websites that so many people enjoy today. Would people have developed enough of a taste for playing cards on a computer for online slots website to be profitable if it weren't for Solitaire? Would we now be living in an age where the prevalence of those online slots websites is so great that they make multiple billions of dollars each year of people hadn't been playing Solitaire as children? Perhaps, perhaps not. We shouldn't underestimate the influence that the humble little program had, though. We also shouldn't underestimate how significant it still is to a surprisingly large number of people today.

Most of you won't have played Microsoft Solitaire for quite some time. Some of you won't even realize that it still comes with every new version of Windows. Rest assured, it's still there. You might have to do a little digging to find it, but it's still there, and it always has been. It probably always will be for so long as Microsoft keeps releasing new versions of its ubiquitous operating software. The number of people still playing it might come as a shock, though. We don't know how Microsoft keeps track of this statistic - and to be honest, the fact that they can track it at all ought to raise privacy concerns - but the company claims that 35 million people from all over the world play their version of Solitaire every month. Between them, they play in excess of one hundred million hands of the game every day. That’s a lot of people with a lot of time on their hands, but choosing to spend that time on a basic game rather than the latest multi-million dollar blockbuster.

As hard as it might be to believe this, Solitaire wasn’t really intended to be a game in the first place. Microsoft just wanted to give people a way to test the functionality and responsiveness of their mouse in those early days of Windows. In 1990, using a mouse was still a novelty, and the entire concept of Windows was brand new. Windows 3.0, which was released in 1990, looks comically limited by modern standards but was revolutionary in its time. More importantly than all of that, the concept of ‘dragging and dropping’ an icon didn’t exist before the release of that third version of Windows. That was the skill that Microsoft needed its users to acquire, and it decided this humble, traditional card game was the best way to train them. They could never have predicted that so many people would develop a lifelong affection for Solitaire because of it.

At least one person in Microsoft’s design team realized that it might be a way for people to pass the time in office jobs. The original product came with a ‘boss is near’ mode, which replaced the card game with a picture of spreadsheets with one click of the mouse in case an employer came near and wondered what you were doing with your time. Microsoft reasoned that the inclusion of such a facility probably sent out the wrong message about the suitability of their new software for offices, and ordered for it to be removed before Windows 3.0 shipped out. An intern called Wes Cherry got the blame for almost including it in the final release, although it’s thought that he was a convenient scapegoat got someone who was more important, and probably ought to have known better.

Even though it’s getting a little long in the tooth now, Solitaire continues to be recognized by the video gaming industry as an important benchmark in the history of people turning to their personal computers for entertainment. In 2019, one year short of its 30th anniversary, the game was formally inducted into the official World Video Game Hall of Fame. Why the adjudicators who determine which games do and don't get considered for that honor didn't wait one more year and make it part of the anniversary celebrations is beyond us, but few people could argue that its place among the elite isn't well-deserved. It might not be the most advanced or thrilling video game that any of us have ever played, but it's likely that most of us have played it far more and for far longer than some games we spent upwards of fifty dollars on in the past.

These days, you'll find the game by typing 'Solitaire' into the Windows Search Engine. It now comes as part of the 'Microsoft Solitaire Collection,' and offers you adjustable difficulty settings alongside daily challenges and other varieties of Solitaire taken from around the world, but it's still the same old game we all know and love at heart. Let's all take a moment to thank Solitaire for all those dull moments at work that it got us through, and wish it a happy birthday. Here's to hoping that it's still around to mark its sixtieth anniversary in 2050.